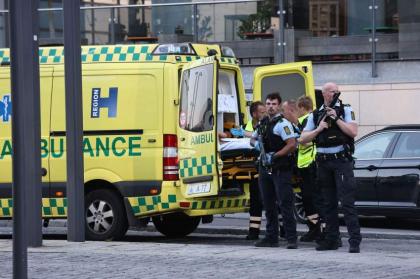 The suspected shooter who opened fire during a July 4 parade in an affluent Chicago suburb planned the attack for weeks and was wearing women’s clothing to help his escape, police said Tuesday.

Robert Crimo, 21, whose family lives in Highwood, just north of Highland Park, where the shooting took place, was arrested on Monday after six people were killed and more than 30 injured during a parade on the day of independence.

Deputy Police Chief Christopher Covelli said no motive had been established for the attack, in which the gunman sprayed the crowd with dozens of semi-automatic bullets fired from a rooftop.

“He brought a high-powered rifle to this parade, he got onto the roof of a business via an escape ladder and started to open fire.

“Crimo wore women’s clothing and investigators believe he did this to conceal his facial tattoos and identity and to aid him in the escape with the others fleeing the chaos.” Covelli said the shooter fired more than 70 rounds from an “AR-15-like” rifle he purchased legally.

Authorities are investigating disturbing online posts and videos made by Crimo, who was captured about eight hours after the shooting following a brief car chase.

“We are all still in shock,” Mayor Nancy Rotering told NBC’s Today show.

“An incredible shock,” Rotering said. “Everyone knows someone who was directly affected by this.” The mayor said she personally knew the alleged shooter when he was a young boy in Cub Scouts and was a Cub Scout leader.

“How did someone get so angry, so hateful and then go after innocent people who were literally having a family day?” Rotering asked.

– Violent content online – David Baum, a doctor whose two-year-old child was in the parade, witnessed the shooting and helped treat some of the injured.

“The people who had left were blown up by those gunshots,” Baum told CNN, calling it a “horrific scene.” On Tuesday, police and FBI agents were sifting through personal belongings left behind by members of the mob as they fled.

Strollers, bicycles, folding chairs and other items littered the parade route on the main street of Highland Park.

Crimo, whose father ran unsuccessfully for mayor and owns a store in Highland Park called Bob’s Pantry and Deli, was an amateur musician calling himself “Awake the Rapper”. Young Crimo’s online posts include violent content alluding to guns and gunshots.

A YouTube video posted eight months ago featured cartoons of a gunman and people being shot dead.

A voiceover says “I just have to do it.” He adds: “It’s my destiny. Everything led to this. Nothing can stop me, not even myself.” Crimo, who has the word “Awake” tattooed on one eyebrow, wears an “FBI” baseball cap in many photos and wears a Trump flag as a cape in one photo.

The shooting is the latest in a wave of gun violence to grip the United States, where around 40,000 deaths a year are caused by firearms, according to Gun Violence Archive.

– ‘Epidemic of gun violence’ – The deeply contentious gun control debate was reignited by two massacres in May that saw 10 black people shot dead in an upstate New York supermarket and 19 children and two teachers killed at a Texas elementary school.

The Highland Park shooting cast a shadow over Independence Day, when cities and towns across the United States hold parades and people attend barbecues, sporting events and bonfires. ‘artifice.

In another shooting on July 4, two police officers were injured when they came under fire during a fireworks display in Philadelphia.

In Highland Park, Emily Prazak, who participated in the parade, described the chaos.

Five of the six people killed, all adults, died at the scene. The sixth was taken to hospital but succumbed to his injuries.

Highland Park Hospital, where most of the victims were taken, said it received more than two dozen people with gunshot wounds aged between 8 and 85.

President Joe Biden expressed shock and vowed to continue to fight “the epidemic of gun violence”. “I’m not going to give up,” he said.

Last week, Biden signed the first major federal gun safety bill in decades, just days after the Supreme Court ruled that Americans have a basic right to carry a handgun in public. .